The National Cadet Corps (NCC) has its genesis in the ‘University Corps’, which was created under the Defense Act, 1917 with the object to make up the shortage of the Army. In 1920, when the Indian Territorial Act was passed, The `University Corps’ was replaced by the ‘University Training Corps (UTC)’. In 1942, the UTC was renamed as the ‘University Officers Training Corps’ (UOTC). The need to create a youth organization at National level to train the young boys and girls to be better citizens and future leaders of our great country in all walks of life, including Defense forces, was rightly realized by our leaders. A Committee under Pandit HN Kunzru was set up in 1946 at the behest of our first Prime Minister, Pandit Jawaharlal Nehru. The NCC came into existence on 16th July, 1948 under the NCC Act XXXVI of 1948 under the Ministry of Defense (MOD).

The Motto of the NCC is ‘Unity and Discipline’ which was adopted on 23 Dec 1957. In living up to its motto, the NCC strives to be and is one of the greatest cohesive forces of our nation, bringing together the youth hailing from different parts of our country and moulding them into united, secular and disciplined citizens of our nation. 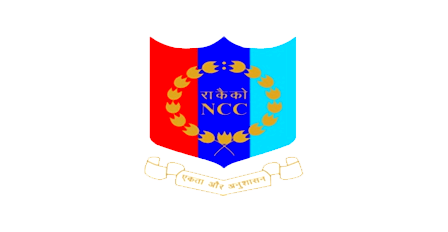 In 1954 the existing tri colour flag was introduced. The three colours in the flag depict the three Services of the Corps, red for the Army, deep blue for the Navy and light blue for the Air Force. The letters NCC and the NCC crest in gold in the middle of the flag encircled by a wreath of lotus, give the flag a colourful look and a distinct identity. Each lotus represents one NCC Directorate (Dte).

The aims of NCC as approved by MOD in Mar 2001 are as under:

•  To develop character, comradeship, discipline, leadership, secular outlook, spirit of adventure, sportsmanship and ideals of selfless service among the youth of the country.
•  To create a human resource of organized, trained and motivated youth, to provide leadership in all walks of life and always be available for the service of the nation.
•  To provide a suitable environment to motivate the youth to take up a career in the Armed Forces.

NCC has adopted community development activities with the aim of NCC cadets imbibing selfless service to the community, dignity of labour, importance of self-help, need to protect the environment and to assist weaker sections of society in their up-liftment. Some of the major activities are:-

•  Tree Plantation - NCC cadets plant saplings and look after them in conjunction with the concerned State Departments.
•  Blood Donation - Cadets donate blood as voluntary service whenever needed by Hospitals/Red Cross.
•  Old Age Homes - Old Age Homes in the country are patronised and regularly visited by NCC cadets.
•  Adult Education - NCC cadets visit remote areas, villages and underdeveloped areas to emphasize the need for education and to assist in the conduct of the Adult Education Programmes.
•  Community Work - Cadets of NCC participate in the rural and urban community projects and other development works like village track improvement, cleaning of streets and ponds, sanitation drives etc. <
•  Disaster Relief - NCC has always extended immediate support during natural disasters and accidents. NCC cadets are trained to provide services during floods, earthquakes, cyclones and major train accidents etc.
•  AIDS Awareness Programme - NCC participates actively in the AIDS Awareness Programme and is presently working alongwith UNAIDS and DG AFMS in carrying out AIDS Awareness Programmes throughout the country.
•  Cancer Awareness Programme - NCC cadets actively participate in Cancer Awareness Programmesorganized at various cities
•  Institutional Training - This training is mostly carried out in schools and colleges by the cadets. In addition, depending upon the type of wing, basic knowledge of that Service is imparted to the cadetse.g gliding and powered flying for Air Wing cadets and boat pulling and sailing for Naval Wing cadets.
•  Camp Training - Camp training constitutes the most important part of NCC training. Every cadet in the NCC is expected to attend at least two camps during one’s tenure to complete the Training Syllabi.
•  Annual Training Camps (ATC) - These are held within the state under the aegis of respective NCC Directorates. The camps are of 12 days duration for senior boys/girls and 10 days duration for junior boys/girls.
•  Centrally Organized Camps (COC) - These camps are of an all India nature and are planned by HQ DGNCC in consultation with the Directorates nominated to conduct them. Selected cadets, as per the vacancies allotted to each Directorate, participate in these camps.


The following types of centrally organized camps are conducted.

(i) Leadership Camps - These camps are conducted on all India basis. There are four Advance Leadership Camps (ALC) and three Basic Leadership Camps held each year.
(ii) ThalSainik Camp (TSC) - Two TSCs are conducted at RD parade ground, Delhi Cantt every year i.e. one for SD/JD boys and the other for SW/JW girls.
(iii) VayuSainik Camp (VSC) - This Centrally Organized Camp is organized for Air Wing Cadets. Cadets from all Directorates attend the camp. VSC is generally conducted in the month of October.
(iv) NauSainik Camp (NSC) - This Centrally Organized Naval Camp is conducted annually for selected Naval Wing Cadets. Boat pulling, regatta and sailing competitions are the main attractions of this camp.
(v) Rock Climbing Camps -Rock climbing camps are held each year to expose the cadets to the basics of rock climbing and to inculcate the spirit of adventure.
(vi) National Integration Camps (NIC) - The Camps are conducted on an all India basis and help bridge the cultural gap among various states of India. In addition the NCC conducts NICs at remote and forward areas to promote national integration. Special NICs are conducted regularly at Leh, Srinagar and North Eastern Region and at Port Blair.
(vii) Republic Day Camp (RDC) and Prime Minister’s (PM’s) Rally - The Republic Day Camp is a prestigious camp inaugurated by the Vice President of India and visited by the RakshaMantri, RakshaRajyaMantri, Chief Minister of Delhi, the three Service Chiefs and other dignitaries. During the Camp a Horse show and cultural programmes are held wherein important dignitaries are invited as Chief Guests. The camp culminates in the Prime Minister’s Rally on 27 January every year which showcases all the activities of NCC.

Report of the NCC